THE BEST MUAY THAI IN VIRGINIA, DC, AND MARYLAND

At T.A.G. Muay Thai, we offer five classes to accommodate a wide variety of student ages and skill levels. The first class shown below is for kids, and the other four are for adults:

In every class, you’ll see students wearing armbands of different colors. Each color represents a specific skill level, and students are continually trying to improve their skills so they can “rank up,” or progress through the ranks/armband colors. [Related: History of Muay Thai]

“I’ve been going to T.A.G for a while now, and I have to say that I appreciate the time, instruction and dedication that Kru Chris and his coaches put forth toward the art and sport of Muay Thai. I enjoy going to the various classes they offer and ‘accidentally’ learning something new. Expect that when you come to have a good time, learn and be prepared to work out!

Chris has traveled the world extensively, and, because he is a military brat, he has lived in many different places. Soon after he was born in Honolulu, Hawaii, his family moved to England, California, Germany, Indiana and then back to California.

When he was hired to work for the federal government, he moved to Georgia briefly, to Maryland and then to Virginia, where he now resides with his wife and two children.

He has a Bachelor of Arts degree from California State University, Fullerton. He currently is a full time Federal Police Officer with 20+ years of experience and operates TAG Muay Thai in the evenings. 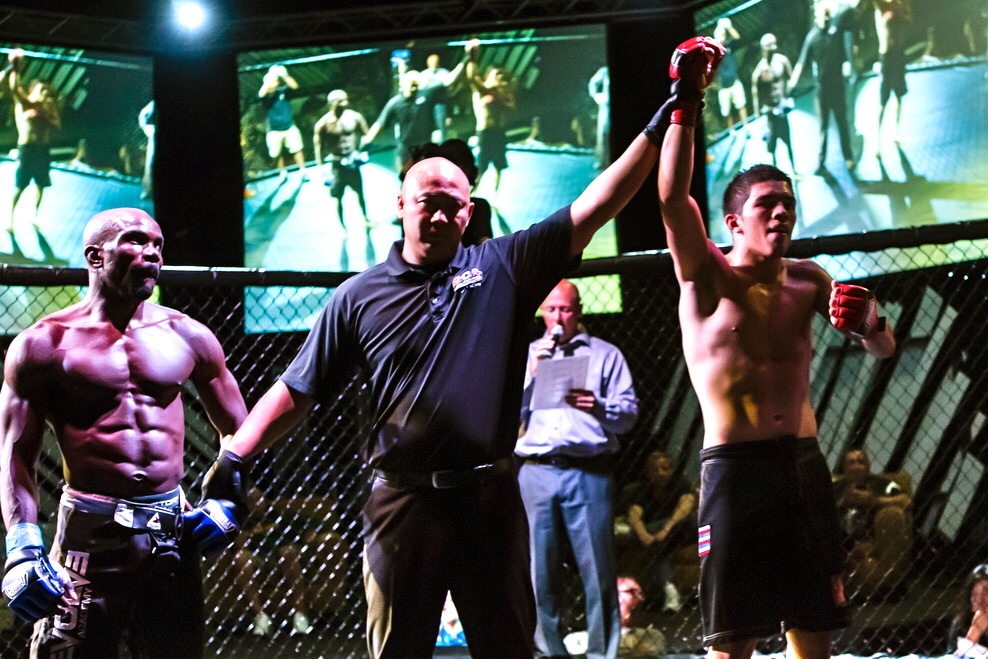 In 1989, Kru Chris was 13 years old, he was bullied at school. A friend of his dad’s was active in Tae Kwon Do and encouraged Kru Chris to become involved in the sport. He later learned additional styles of combative arts, including Lima Lama (Polynesian Martial Art), American kickboxing, Jiu-Jitsu and wrestling. When he was 23, he discovered Muay Thai (Thai boxing). This is now his primary style and passion because of Thai boxing’s applicability to real-life combat situations and the ability to inflict damage on one’s opponent.

In addition to developing continually evolving curriculum for his school, Kru Chris considers his continued personal development equally as important. To ensure that his fighting and teaching style evolves to address updated and innovative techniques, he regularly participates in live drills; trains with amateur and professional fighters; and attends, conducts and participates in workshops and seminars to further his knowledge.

“We brought our daughter in for private training and the kids classes while we were visiting from out of town. The training was excellent, well organized and well executed. The drills for the kids are at an advanced level and keeps them engaged and excited. All the coaches have specialties and are very active in the children’s classes. Kru Chris has assembled an amazing team. Can’t wait to come back in the summer.”

T.A.G. students range in age from four to adult, and they vary in skill level from beginner to adult professional fighter. To accommodate this range of age, skill and ability, Kru Chris has developed unique and structured programs to ensure that students embrace the critical foundations of the Muay Thai art while continually developing their skills.

With each T.A.G. curriculum, he teaches the principles of body movement, stand-up grappling, takedowns, ground survival, self-defense and realistic striking for sport (ring and cage). 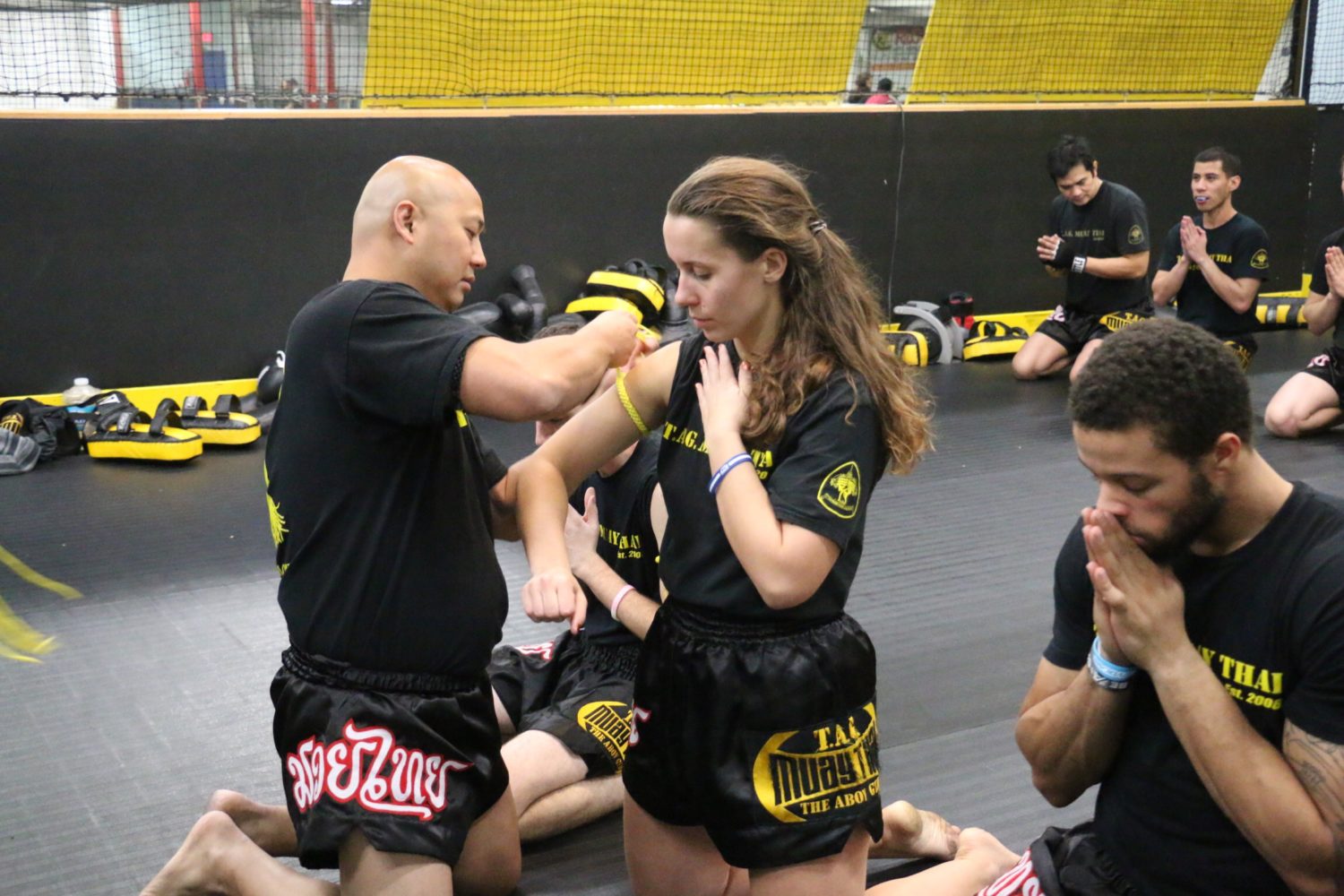 Kru Chris is regularly invited to participate in community events to demonstrate and share the unique and explosive art of Muay Thai and the Thai culture. Here are just a few of the many notable events at which he has conducted workshops and put on demonstrations:

He has also been invited to conduct self-defense workshops for the White House and for Washington, D.C.-area businesses. 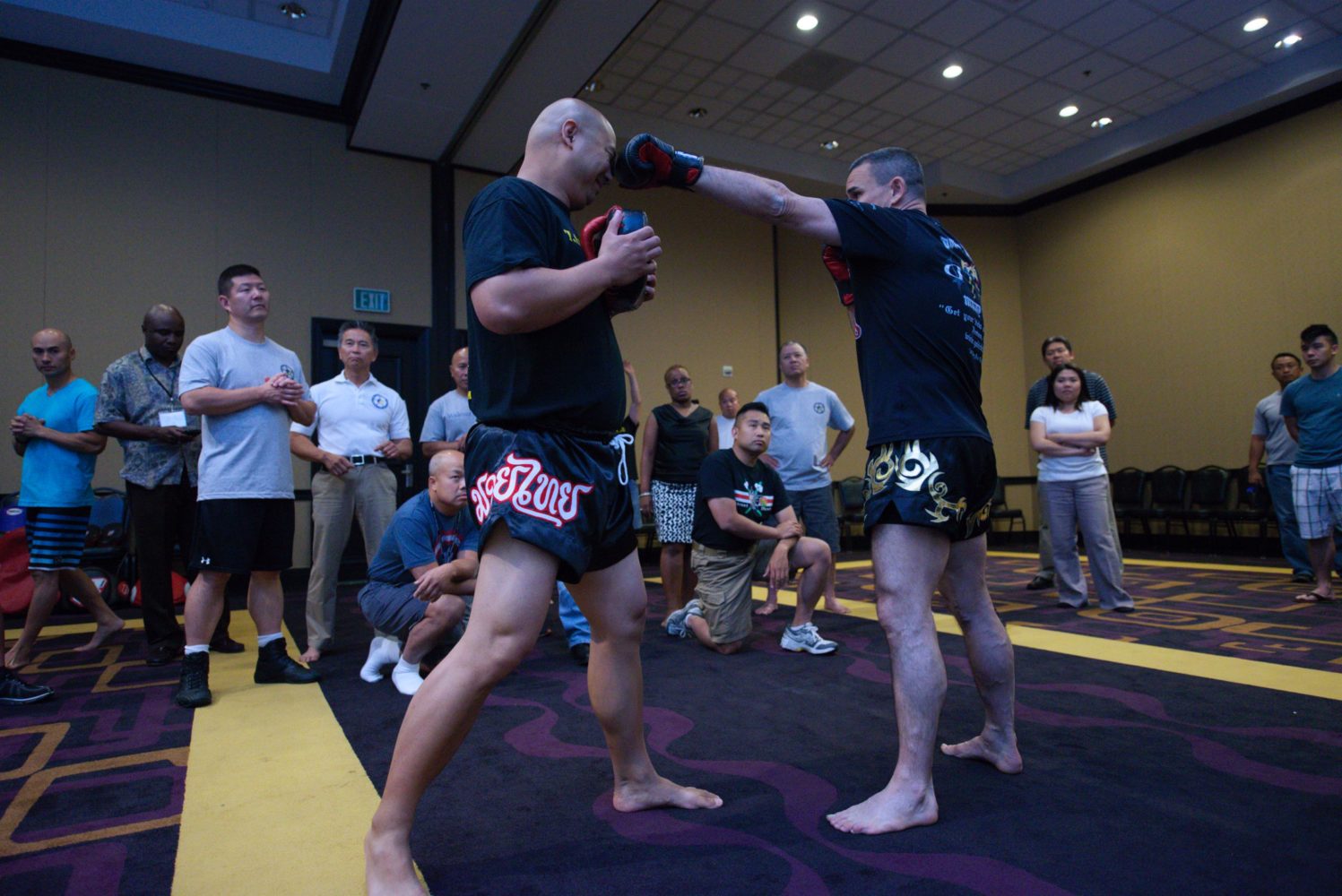 In addition, Kru Chris hosts sparring exhibitions and serves as the promoter and referee at these events. Being a judge or referee requires in-depth knowledge of the sport and its governing rules and regulations.

Sparring is extremely important in any martial art because it provides the most authentic training you can get without engaging in a real fight. Sparring enables you to build the most critical skills needed in the martial art, such as those listed below, in a competitive environment:

“Love how professional and encouraging everyone is! I was hesitant to take the training since I never had formal training, only the watered-down cardio version of kickboxing. The TAG team welcomed me with open arms. I’m so glad I found TAG Muay Thai. It was awesome that you get a free 30-day trail to see if you want to commit. I never felt pressured into signing up. I have signed on and haven’t regretted it since. They’re great with children, beginners and advanced students!”

With more than 30 years of experience in a variety of different martial arts, Kru Chris brings a unique perspective to authentic Muay Thai training. Whether you want to learn Muay Thai for fitness or self-defense or to fight at the amateur or professional level, his proven track record to develop, demonstrate and execute a specific curriculum with positive results will enable you to meet your short- and long-term goals.

In the martial arts, the person you train under is extremely important. Your physical and mental development are a reflection of the instructor you work with. For that reason, it is critical to select an instructor who teaches you not only correct technique and form, but also the correct attitude and philosophy, as well as respect, honor and character.

Because Kru Chris exemplifies these characteristics, he has earned a reputation as an effective, serious and dedicated Muay Thai instructor who cares about the development of every student he works with. The coaches and instructors who train under him to teach students at T.A.G. Muay Thai are also highly respected and sought after because he has personally trained and developed them.  The T.A.G. coaches have the highest possible level of credibility because they are associated with Kru Chris and maintain high standards for ethics and quality instruction.