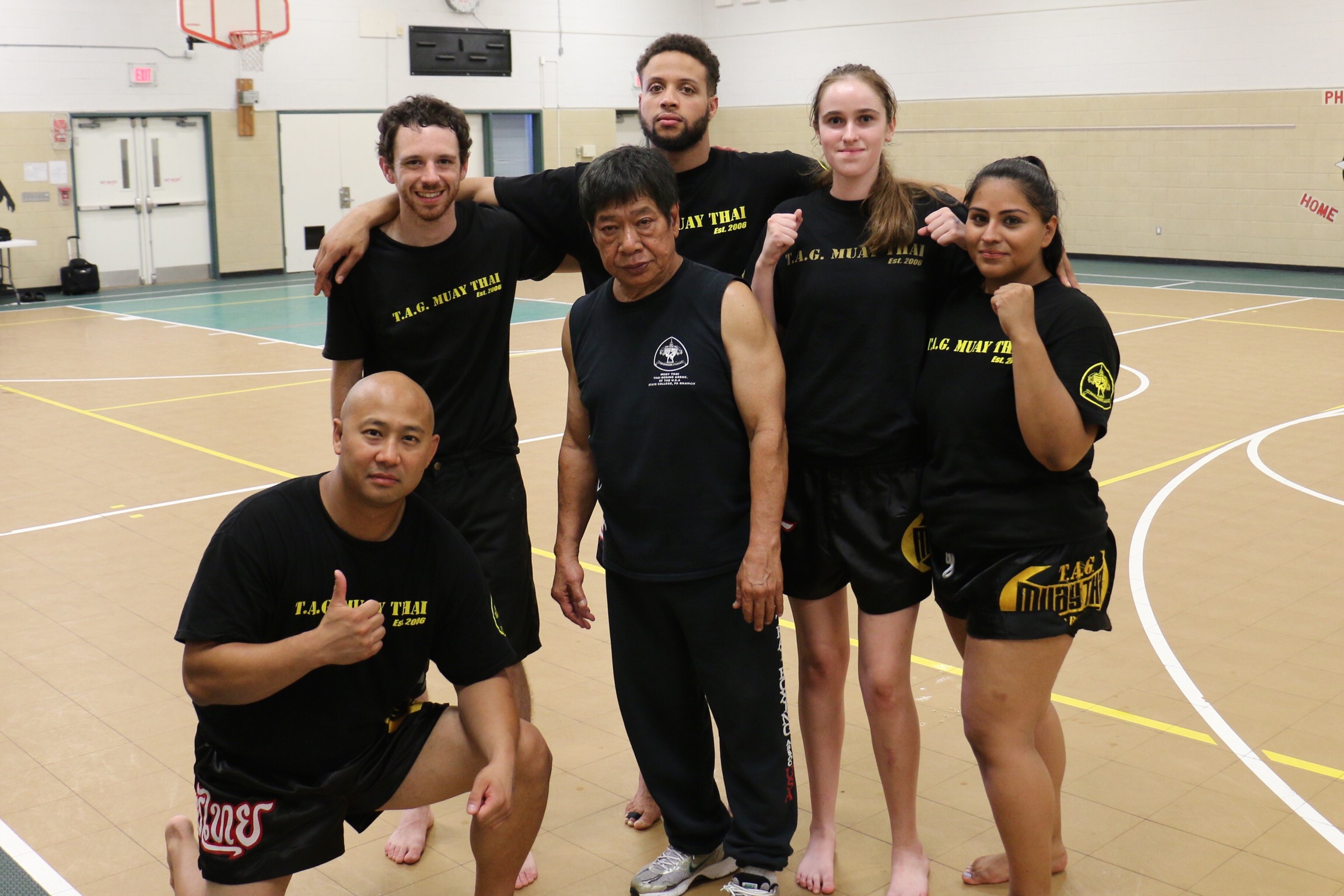 Ajarn Chai is definitely a Muay Thai legend. It’s been a long while since I last attended an Ajarn Surachai Sirisute seminar.  Maryland Thai Boxing host the founder of the World Thai Boxing Association every year and I am glad that I was finally able to come out after all these years!

For those who aren’t familiar with Grandmaster Chai (Ajarn Chai), he paved the way for Muay Thai in the United States.  Yes, there were other Thai’s that helped as well, however, he was THE first.  Ajarn Chai came to the United States in 1968 to teach Thai Boxing but first ended up at Woodstock.  He managed to befriend and train a notorious motorcycle gang called the Hells Angels, having no idea who they were until the FBI explained it to him.  So Ajarn Chai started training the FBI agents.  Tensions were high during the seminar because you had the FBI on one side of the room and Hells Angels on the other.  Ajarn Chai was the first to teach Muay Thai to Law Enforcement.

Most importantly, Ajarn Chai broke down barriers because training was about the art, and love for the art helped bridge the gap between the two “rival” groups. One of the stories he told at the seminar was how Dan Inosanto (Martial Arts instructor under Bruce Lee) introduced him to Dallas Cowboys Coaching Legend Tom Landry.  At the time, Ajarn Chai didn’t know who Tom Landry was.

Ajarn Chai started training some of the players and Landry asked him a question in his office and a young Chai told him if he get off his fat ass and see what they are doing and participate, he wouldn’t be so fat and walked out of the room.  Then somebody informed Ajarn Chai that was the head coach for the Cowboys.  Landry called him back…a young, naieve Chai thought he was fired.

Long story short – Grandmaster Chai was THE first to use Muay Thai as a means of conditioning for professional sports.  Ajarn Chai resigned after 7 years when Coach Landry was fired in 1990.

Grandmaster Chai was also the first to introduce a ranking system for Westerners, created the oldest running Muay Thai camp (25+ years) and the first to do instructor certifications (NOT a weekend seminar scam like some other organizations – this is years of training and testing through approved WTBA testing and instructor development camps).  Before the Gracie challenge, Ajarn Chai literally had to fight (bloody and messy fights) other Martial Arts instructors on a weekly basis to show Muay Thai’s effectiveness back in the 1970’s and 1980’s.  He also started traveling the World Wide seminar circuit to share Muay Thai with the entire world!  Ajarn Chai paved the way for what Muay Thai in the United States is today!  His humility is his biggest asset.[metaslider id=1523]

In the Maryland seminar that I recently attended, you could see Ajarn Chai trying to pass the torch for future generations.  He taught a couple of slick setups with knees, checked everybody’s stance and footwork, along with clinch and elbow techniques.  He also had instructors certified by himself teach at the seminar so he could watch and make sure everyone was on the same page.  Ajarn Chai’s passion for the Thai Martial Arts is contagious and impressive.  Learning from him and watching him move with ease is a site to see and it’s easy to see why Nak Muays world wide come to see him.