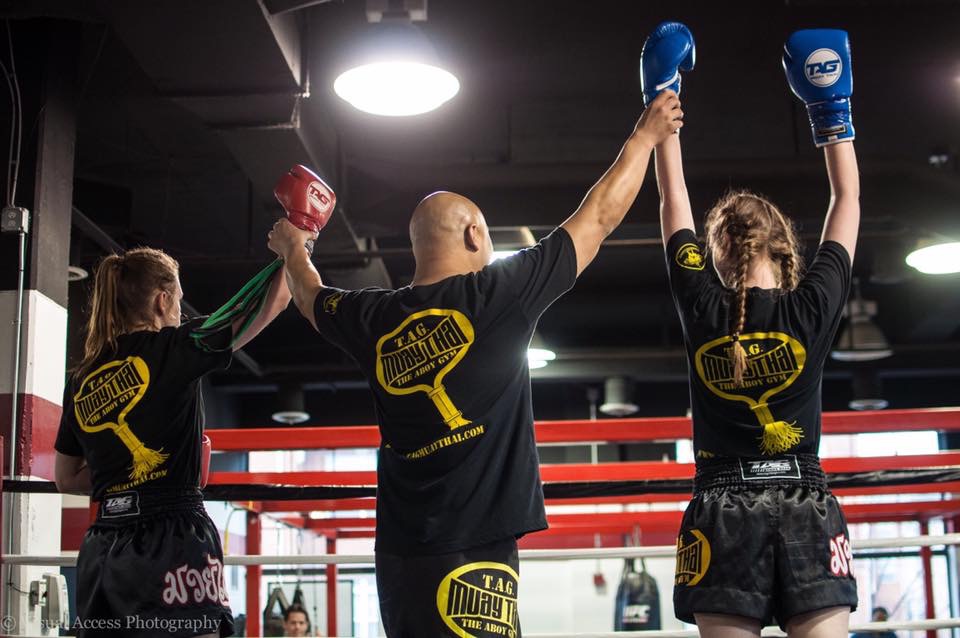 We are warriors.  For anyone who fights Muay Thai, you understand that it takes a certain mentality and level of psychological strength.  It takes a special type of person to willingly step into a ring with someone else who is there to deliberately try to hurt you, and it is your sole objective to beat them first.  Physically, mentally, and even emotionally, this is no small feat.  I’ve been told that, since I’ve fought at the highest amateur level, the WKA World Championships, I should now be fearless because I’ve conquered the scariest thing that I’ll probably ever do.  There’s an element of truth in that, but on the whole, it’s not necessarily accurate- now I simply have confidence going into intimidating situations.  But confidence is not the same as fearlessness.  Many things still scare me, but I do them anyway because I believe that I will survive and thrive.

That’s what Muay Thai instills people, especially women: Confidence.  Trying to be fearless is not realistic, but confidence is invaluable.  Muay Thai women have the ability to handle whatever situation they’re placed in outside of the ring because they’ve handled some pretty tough curveballs inside the ropes and emerged as survivors and victors.  And trust me, female Muay Thai fighters, particularly here in America, have a lot thrown at them.

I’ve seen it all: the disbelieving looks, the expressions of concern, the flat-out denials of my abilities, the Napoleon Complex in men, the teasing, the “c’mon, fight me,” taunts, and the questioning of my femininity.

When I first told my family I wanted to start boxing, they were shocked.  Unsupportive is an understatement, to say the least.  They did come around after a while, but it was an uphill battle.

When checking out at a convenience store, wearing my Muay Thai shirt and boxing shorts, the cashier, a Thai man, directly told me that, “women cannot fight Muay Thai.”

When it ended relationships because he couldn’t handle that I was “tougher” than he was.

When people joke that I’m their new body guard or shrink away from me saying, “please don’t punch me,” as if I walk around beating people up all day.

When I got challenged by random people in the hallways of my old high school who thought that I need to prove myself to them.

When I lived my life in shorts and t-shirts and didn’t dare wear any makeup or do my hair because the result of any attempt to do so would be immediately destroyed after the first round in the ring.

I’m fortunate enough to be a member of a wonderfully accepting and inclusive gym, but too many female fighters are ostracized by the male members of their own gym.  I myself experienced this on a slightly different spectrum: When I first joined my gym (but not anymore) I was put into a separate social category by the other members of my gym because of my age.  I joined when I was a sophomore in high school and most of the other fighters were at least 10 years older than me.  But as I became a more involved and competitive member of the TAG family, I was eventually (when I turned 18) treated just like everyone else.

Through all of the criticism and snide remarks, I have managed to hold my head high and push forth to achieve success in doing what I love.  I definitely did not expect to ever be a fighter, but today I am, in more ways than one. And this is a trait and a sensation that Muay Thai women around the world share, based on the common ground of our experiences in this largely male-dominated sport.

On the other side of this criticism and separation, I’ve received so much support and love from my family, friends, gym, and community.  People in school used to stop me and say, “are you the boxer?  That’s super cool, keep it up,” and my high school principle specifically praised me in his speech at my class’s graduation.  I even wrote an essay on how Muay Thai has made me a stronger woman and it was read at the United Nations.  I’ve had many people, mostly women, come up to me and tell me how much of an inspiration I am, for my strength and for doing that I love despite the critics.

Women in Muay Thai face a lot, but they are the bravest people on the planet, and Muay Thai gives them the confidence and self-respect to handle everything that comes their way in life.