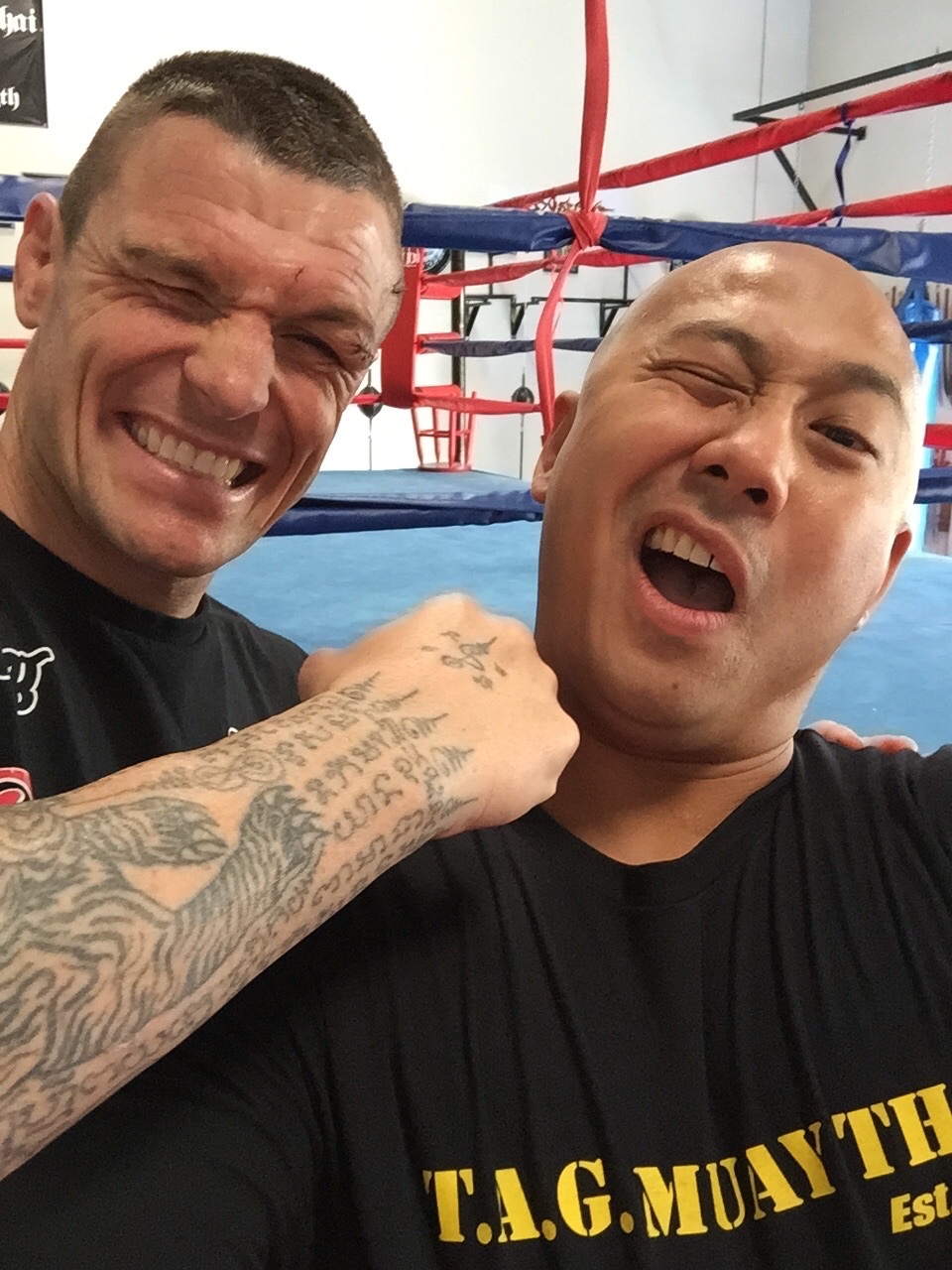 The “Gunslinger”, 10x World Muay Thai Champion John Wayne Parr was back on US soil to fight Cosmo Alexandre at Lion Fight 25 at Pechanga Resort and Casino in Temecula, California.  The fight didn’t go his way, he suffered multiple stitches and a broken foot, however, he did break Cosmo’s nose in the process.  [Related post: Kru Chris Recap of Lion Fight 25].

I flew from Washington D.C. to watch him fight and to participate at a seminar at Double Dose Muay Thai in Fontana, California the day after his fight.  Any ordinary man wouldn’t have showed up on crutches, but sure enough, JWP is world class and came on crutches, stitched, a broken foot and he actually TAUGHT the seminar!  I’ve been to numerous seminars this year but from the moment he came hobbling in, to the moment he hobbled out, you can see the passion and excitement he has when it came to Muay Thai.  Truly a World Champion!

I met John Wayne Parr at the fights the night before and he was kind to talk with me briefly and took pictures with fans.  Once he walked into Double Dose Muay Thai the next day, he saw me and remembered speaking to me the night before.  JWP has met a lot of people in his lifetime but for him to remember my face and talking with me the night before, was actually pretty cool!  When he hobbled in on crutches, we were expecting he was going to talk and Double Dose instructors and coaches were going to demonstrate.  Not the case with JWP, he demonstrated, went around and helped participants with the techniques.

John Wayne Parr’s passion and love for Muay Thai was awesome to see.  He told funny stories from when he lived in Thailand for 4 years, the different language barriers between Thais, Americans and Aussies and he incorporated this into his seminar which made “training with a 10x World Champion” that much more remarkable![metaslider id=1303]

For those that have been training in Muay Thai for a while, everybody is going to have their own “style” or way of doing things.  I did the Saenchai seminar in Philly this year, both taught a “Catch Kick and Counter” technique.  There are multiple ways of doing this technique but when I compared the slight differences of the techniques, JWP moved away from the kick and wind up the opponents leg and spun them like a top and kicked.  Saenchai moved away and didn’t do the wind up, he used his opponent’s momentum and placed the opponents leg to the ground.  I teach once we catch the leg, jack it up and spin, then kick.  Continuing with my learning, I now do a combination of both “styles” depending on the dynamics of the fight.  Doing the JWP seminar was possibly a once in a lifetime experience.  John Wayne Parr puts an incredible seminar together and if you have a chance to train with a Living Legend, you won’t be disappointed!