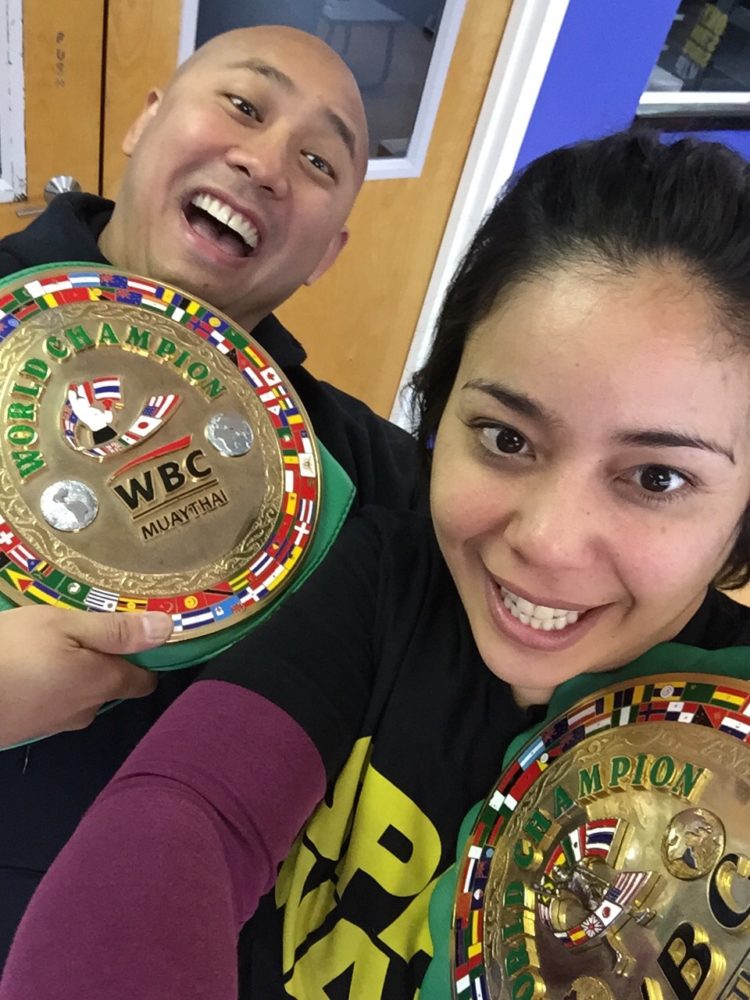 Training and one-on-one with Miriam Nakamoto.

12/4/2015 – As I sit inside the lounge at Level Up Boxing in Bowie, Maryland, Miriam Nakamoto sits on the leather sofa across from me. She is very cheerful, personable and warm with students passing by. You can’t tell she had a 3 a.m. flight that morning.

Miriam and I discussed the attributes of a Champion versus a Contender; they include focus, consistency with fundamentals, asking the right questions (curiosity) and self-reflection.

To new Muay Thai students, ask questions if something doesn’t feel right or if you don’t understand it.

Miriam’s humility and thirst for more knowledge is quite refreshing. She talked about some of her previous coaches would tell her to throw the jab, so she threw it. Miriam wants to understand the reason behind the jab. Like a true champion, Miriam Nakamoto even provided a world class analogy.

Some people are the ring finger, some a thumb, others the “bird” and she is a pinkie. Her training partner is a thumb. What works for the thumb may or may not work for the pinkie. If she never questioned the technique of the thumb, she would’ve kept trying the technique for a thumb rather than for a pinkie.

If there is any advice Miriam can give active fighters, self-reflection is it. She gave numerous examples of professionals that aren’t honest with their own abilities. Everything we discussed was very basic and fundamental. In other seminars, workshops and lessons I have attended, instructors were big on their own personal combinations and fancy techniques, Miriam Nakamoto was the opposite. She described me as a very “cerebral” person and when we started breaking down the technical aspects of Muay Thai, we started with how we get our power. We started with stance and footwork and how to generate power through activating your hips. She converted my Kick Stance to a Western Style Boxing stance to do a basic drill to help get me “grounded”. [Related: Proper Muay Thai Stance with Kru Chris]

Miriam explained the importance of “controlling space” utilizing distance and to be “grounded” when throwing your techniques. I kept my upper body relaxed, hips are a bucket, tightened up the inside of my legs while pushing out with the pads of my feet> Miriam then pushed and pulled my body weight to help me understand “grounding” my body weight by pushing out so I can throw hands with more power. Another Analogy she used was to think of a sprinter. When they start, they are close to the ground and as the gun goes off, they explode off the ground in an upward and forward motion.

Spending time with Miriam was great because it gave me an opportunity to pick her brain on her mentality, training, drills, business ventures, personal life, etc. She is a fun girl with lots of knowledge when it comes to the Fight Game. We took fun pictures with her championship belts, my “standard” selfie, posed with my students at Spar Wars and did a video of her demonstrating Shadowboxing and her Footwork! Thanks again to Level Up Boxing for making this opportunity a reality and to “The Queen of Mean” for taking the time to spend with me!