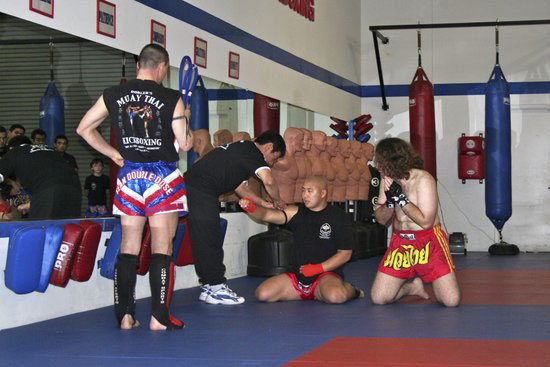 Muay Thai is an ancient martial art dating back to 2nd or 3rd B.C. Thailand; the fighting style did not become an official sport beyond Thai warrior use until the 1400’s. Though Muay Thai has been around for a long time, regulations weren’t introduced to competitive fighting until the 1930’s.

Muay Thai is an ancient martial art dating back to 2nd or 3rd B.C. Thailand; the fighting style did not become an official sport beyond Thai warrior use until the 1400’s. Though Muay Thai has been around for a long time, regulations weren’t introduced to competitive fighting until the 1930’s. Along with Muay Thai’s unique utilization of “eight limbs,” Muay Thai fighters are also easy to recognize as they are often in short, satiny shorts – here’s why:

Why are Thai Shorts so short?Over the years, certain components of Muay Thai have remained the same. Nak Muays have always required a large range of motion to deliver knee, elbow, shin strikes as well as teeps and clinches to defend or gain control in a fight. Add that to the fact that it can get pretty hot and humid in Thailand and you can see why Thai shorts have become the Muay Thai uniform of choice.

What are the longer shorts called that I see some people wear?The longer shorts with small slits on each side are standard UFC shorts. They still allow for a pretty good range of motion due to the slits and allow a Nak Muay to be more conservative. The con of UFC shorts are that they do not follow Thai tradition and some believe that wearing these shorts prescribes to western ideals over Thai ideals.

Do certain colors mean certain things?The answer to that question depends on what gym you choose to train at. Some gyms use Thai short colors to display rank. At T.A.G. Muay Thai, we use an armband system so the color of your shorts is irrelevant. Though, yellow is often associated with royalty in Thai culture due to the late King’s affinity for the color. Aside from yellow, Nak Muays generally choose bright colored shorts to add an element of showmanship when in the ring. What about pink shorts?Pink shorts are a touchy subject for some. Our advice – don’t buy pink shorts until you can kick everyone’s ass in a sparring exhibition at least. Pink Shorts are earned by those who have persevered through getting beat up enough by the Kru and someone wearing pink shorts should also be able to dish out a decent butt whooping too.Where can I buy Thai shorts?

—Have more questions about Thai shorts? See what our Nak Muays are wearing on Instagram, Twitter, Pinterest, and Youtube! If you live in Northern Virginia, feel free to claim a 14-day FREE trial to see what our gym is all about.