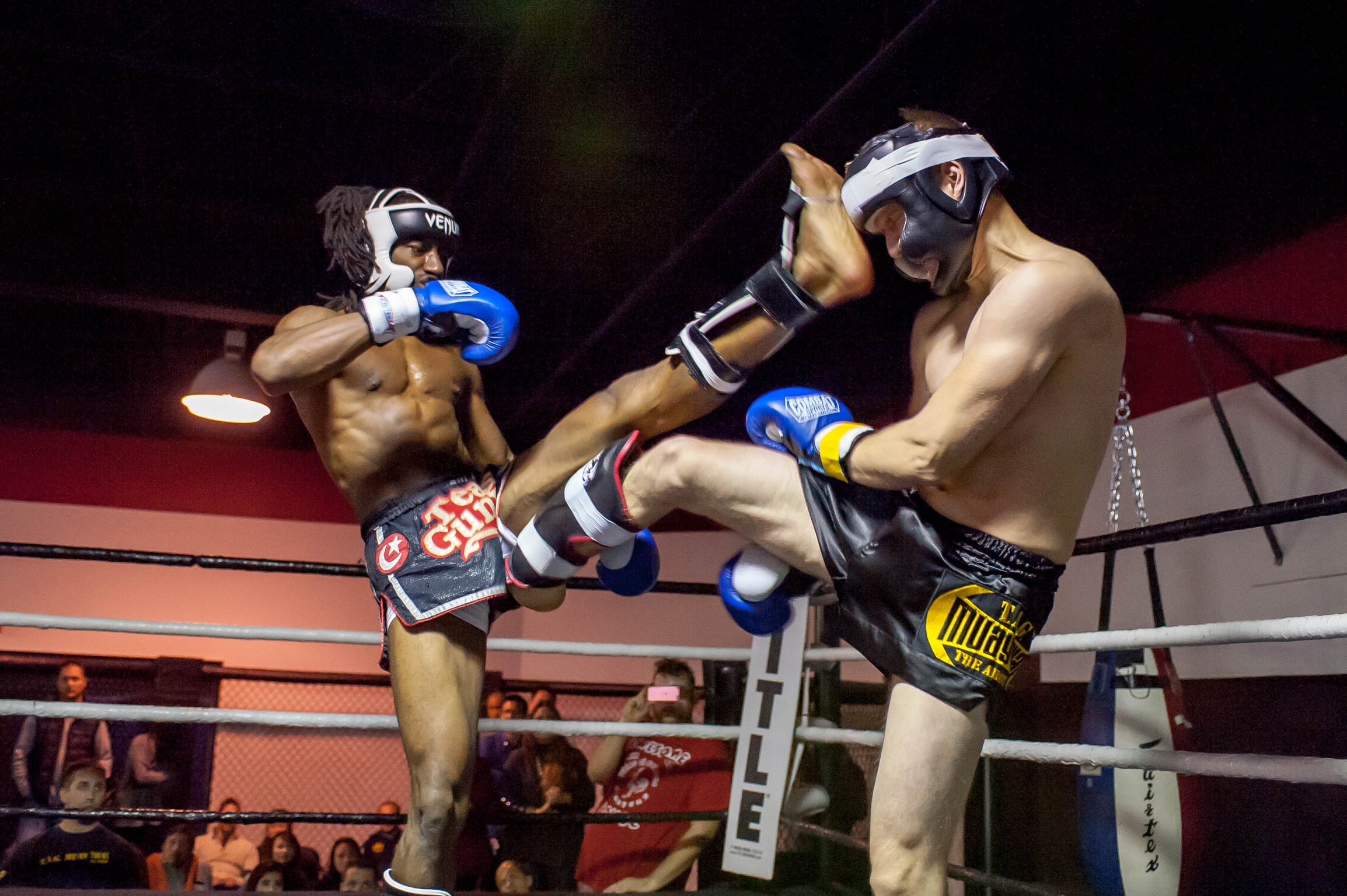 Muay Thai stemmed from Muay Boran, an ancient martial art originating in the Siam region of Asia. Muay Thai has been in existence since 2nd or 3rd B.C. and became popularized as an international combat sport in the 1970’s – around the same time that Kickboxing originated. [Related: History of Muay Thai]

Movement is all about mindset. Muay Thai began to help warriors win wars. Training focuses on scoping an opportunity to get in close and then destroy the opponent. Kickboxing was developed as a sport and matches are faster paced, like televised UFC and boxing matches. Ajarn Bryan Dobler demonstrates basic Muay Thai foot movements in the video below, notice the lack of a “dance”

Muay Thai isn’t known as the art of eight limbs for nothing. Muay Thai fighters use hands, feet, knees, and elbows to deliver strikes. Kickboxers primarily rely on just feet and fists (most Kickboxing competitions prohibit the use of Muay Thai’s signature elbow and knee moves).

Though neither Muay Thai fighters nor Kickboxers practice ground-level fighting techniques, Muay Thai offers clinch fighting. The clinch – much harder than it looks, brings the opponent in for knee and elbow strikes. Kickboxing, similar to Boxing does not allow

You won’t ever see a kickboxer throw a kick below the waist and get away with it in a regulated fight – strikes below the belt are not permitted. Meanwhile, Muay Thai fighters are famous for having insanely unbreakable shins from practicing shin kicks and blocks so much.

Thai boxers don’t practice western boxing techniques and use an open palm hand positioning. Besides, a closed fist can break upon striking an opponent’s skull. It is common in kickboxing to see a lot of emphasis on traditional boxing and use of hands. Kickboxers and boxers alike don’t have to worry about the clinch so those boxing combinations are easier to carry out. Check out Ajarn Daniel Sullivan’s open palms in the defensive posture and counters video below. [Related: Is Muay Thai Effective for Self-Defense?]

To the untrained eye, Muay Thai kicks and Kickboxing kicks don’t look too different. But, if you watch YouTube fight videos on repeat a few times, you’ll notice a few things. One, many times kickboxers strike with the top of their foot opposed to their shins like Thai Boxers. Two, you’ll notice that kickboxers often bend the leg while kicking to close distance quicker. Muay Thai teaches a straight leg kick which is ideal for when you have already closed the distance (after all, Muay Thai fighters wait for that opportunity).

Now you know some basic differences between Muay Thai and Kickboxing. If you’d like to train Muay Thai or Kickboxing but aren’t sure which, the best thing you can do is visit local gyms for a good fit.

If you are in the Northern Virginia area, feel free to stop by TAG Muay Thai to begin a FREE 30-day trial. Good luck!