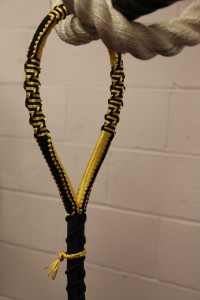 Learning commonly used Muay Thai words and phrases is crucial whether you are new at a Muay Thai gym or  thinking about joining one. Muay Thai basically means Thai Boxing, translated from Thai to English. Muay Thai is an age-old martial arts originating from Thailand. Muay Thai is also known as the “art of eight limbs” due to the distinctive use of punch, elbow, knee, and kick strikes [related: What is Muay Thai?].

In an authentic Muay Thai gym, you might hear some foreign Thai words used from time to time. We’ve translated the most common Muay Thai words and phrases from Thai to English so that you can focus on training rather than language barriers.

The “Mongkon” is a circlet worn on the head as a charm to bring prosperity and to protect the wearer from danger.

Depending on what gym you belong to, you might hear these Muay Thai words on a regular basis.

—If you are local to Northern Virginia, we hope that you stop by T.A.G. Muay Thai for a FREE 30-day trial for authentic Muay Thai training. Not local? Check us out on Facebook and YouTube for fight highlights and how-tos.