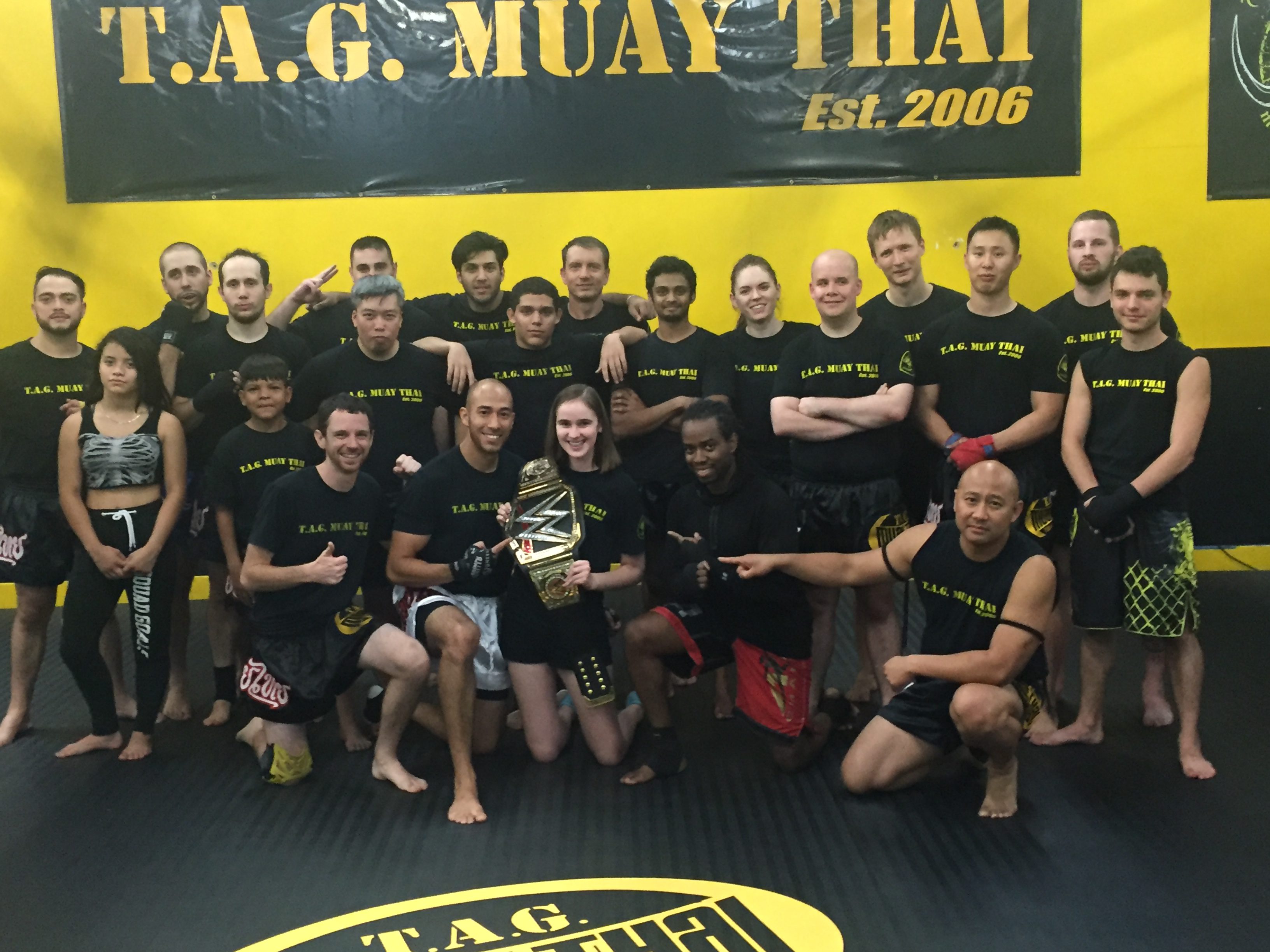 This week is my 3rd anniversary at TAG Muay Thai.

This week is my 3rd anniversary at TAG Muay Thai.  I can hardly believe it’s been three years already.  When I look back to where I was on my first day of Phase I class to where I am today, I do not recognize myself.  I could never have imagined that I would be capable of everything I can do now and that I would have such amazing and life-defining experiences.

I began Muay Thai in order to get better at basketball.  As a basketball player for most of my life (as a 5’10” female it only seemed natural) but one of my biggest problems was that I was not aggressive.  I was a star player in practice and doing drills.  But when it came down to game time, I struggled because I did not want to touch other players or be touched.  My problem was that I didn’t want to aggressively guard anyone or fight for possession of the ball.

I decided that I needed to conquer this phobia somehow if I wanted to make varsity the following season.

So, I emailed Kru Chris and went to my first Muay Thai class the next week.  I walked into the gym not knowing what to expect.  I was a skinny 16-year-old girl who had never worn boxing gloves or willingly punched someone in her life. [Related: 5 Challenges of a Beginner Nak Muay].

The TAG Muay Thai family made me feel instantly welcome.  They were all very patient working with me and helping to make sure that my technique was on point even though I was new.  I remember the day that I got my TAG Muay Thai uniform (officially becoming a member of the team).  One of my training partners ran up to me and literally lifted me off my feet in his excitement.

Fast-forward six months and I had to make a decision: go to TAG or to pre-season basketball practice.  I think it’s clear what I chose to do.  This was also the moment when I mentally decided to become competitive in Muay Thai.  Honestly, there is no concrete rationale behind this decision except that, after only six months, I liked Muay Thai better than I liked basketball after eight years.

A year after I started training I found myself at the WKA National Championship.  I do not recall ever being more nervous in my life.  Time was moving in uneven intervals and I had no idea what to expect fighting at this level.  Largely due to favorable brackets and the tenacity of my team, I got a silver medal in my division.  But that fight woke me up to how intense the competition is.  I now had a much more realistic understanding of what it meant to be a Muay Thai fighter.  The prospect was daunting.

I found out in May that I had qualified for the U.S. National Kickboxing Team and had the opportunity to travel to Spain the following November.  I immediately laughed.  How could I, having been training for barely a year, compete in the world championship? [Related: Muay Thai Teen Competes at WKA Worlds]

But the idea stuck in my head.  I imagined what it would be like to go and compete at that level.  Everyone told me no.  Well, everyone except my dad. He supported the idea but doubted my commitment to the training I would be required to put in.

I began training for this competition on my own, and in July I approached Kru Chris and told him that I’ve decided to compete in the World Championship.  He understandably had his doubts as well, but he agreed to train me.  Here I must give the credit to my coaches.  They took valuable time out of their day to train with me during our regular training sessions and after hours.  They went above and beyond to make sure I was ready for this tournament.

And my commitment never wavered.  I stuck to my diet and workout schedule.  And I saw the results.  It was a grueling 14 weeks, but I eventually made it to November 1.

I will not detail the WKA Worlds here because I could probably write a book about my experience there.  All I will say is that I would not have even had the courage to get on the plane if it wasn’t for the fact that I knew my team was supporting me back home.

I ultimately won silver in the K-1 division in Benidorm, Spain.  I was the first person from TAG to compete internationally, so, as Kru Chris likes to say, I set the bar. [Related: Muay Thai USA Teen Competes at WKA Worlds].

Looking back to how I felt after my first class, I never imagined that in less than two years I’d be competing at the highest level.  Muay Thai and TAG have changed my life.

Now I am a college freshman, and although I cannot attend TAG regularly anymore due to distance and major surgery nine months ago, I am still very much a member of the team.

Every time I go back to TAG I feel as though it has simultaneously changed to the point of being almost unrecognizable and that it is exactly the same as it was on my very first day three years ago.

This is because, while the structure of the class, the implementation of testing and ranking, and the types of drills have changed, the attitude and atmosphere of the gym have not.  I was back just last week and when I walked into the door, one of my coaches threw his arms open and said, “welcome home!” If that doesn’t say it all, I don’t know what does.

If you are local to Northern Virginia, stop by T.A.G. Muay Thai to see if we are a good fit. Not from the area? Check out TAG Muay Thai how-to videos on YouTube.